Primarily “Data types” in java can be categorized into two types. That are, Primitive and Non Primitive or Reference data types.

Primitive data types can be classified into four groups boolean, character, floating point and Integers. Everything else other than primitive types are said to be reference types.

In Java types are associated with variables. A variable is a identifier(name) given to unit of storage that stores values of specified type. that hold a value(literal) of specific type(primitive types). It is used to store values for later use in the program.

Variables are defined with combination of identifier, type and optional access and non-access modifiers. Variable can be optionally initialized.

These Primitive Data Types can be categorized into four groups

Following shows declaration of a variable of type boolean

Optionally underscore(_) can be used in integer & floating point literals for readability. Example: 2_534_382

The type byte is the smallest integer data type that java offers. It is used to store signed 8 bits (1 byte) ranging from -128 to 127. This data type is used when it is required to deal with binary data or binary network streams/files.

Double data type is use to represent double precision numbers. Double uses 64-bits to store values. It is useful especially when it is required to store very large or very small numbers with precision. Double types are declared using keyword double . Double types can store values ranging from ~4.9e-324 to ~1.8e+308 . By default double is used to represent decimal numbers.

Primitive data types are available in different sizes and support different range of values according to size. We have to choose the best possible data type as per requirement. Unlike other static typed languages C/C++ java data types size and range doesn’t change as per architecture of system(OS) to support portability and platform independence.

If you assign a value which is beyond the range supported by that data type, error will occur with message “incompatible types: possible lossy conversion“.

Boxing and Unboxing of Primitive Types

Read In detail about Boxing, Unboxing, Autoboxing and Autounboxing: #TBA

Anything other than primitive type is said to be Non-Primitive or Reference type in java.

Following are Non-Primitive or Reference Types that java offers

Unlike C/C++ we don’t have to use character arrays to define strings. Java offers Reference a built-in Reference Type to deal with strings. Strings are enclosed by double quotes.

Declaration and usage of strings

Classes play vital role in object oriented programming.IN Java code is written in the form of classes. Each java source file should contain atleast one class and atmost one public class

Classes are building blocks of object oriented programming in java. Classes act as blue print for objects(instances) instantiated from class.

Classes provide a way to create your own types

Objects are created(instantiated) from class by using new keyword

Anatomy of Class Definition in Java

Class are blueprints for object which are created by instantiating a class. Each class can contain fields and methods. These fields and methods can be called as members. Visibility of these member(fields & methods) is controlled by access modifiers.

Class fields can be either class variable or instance variables.

Each java source file should contain at least one public class. Java Source files are made up of classes

Above code describes the definition of a typical class. Here we have taken student as an example.

Defining a constructor is optional. if not defined java uses default constructor with no arguments

Purpose of creating class which is a blue print is to create objects from it. Words object and instance can be used interchangeably

The process of creating the instance is called instantiation. This is process through which we can create objects out of classes. Keyword new is used to instantiate(create instance).

We have defined class so that we can create instance for each student in a class/section or college. Each instance created will be independent and will have it’s own isolated data or memory.

Objects are constructed or instantiated using the keyword called new . Following code shows creating students named Bruce and Lois. When creating instance arguments to constructor are passed to initialize the object being created. If constructor is not defined or takes no arguments no need to pass any arguments when creating object.

Interfaces in java are used to write public API’s. Interfaces provide a way to achieve abstraction and provides a common ground for outside world to interact with objects through methods exposed (implemented).

Typically interfaces don’t contain any definition e but only declaration of methods and variables. As said interfaces are used to write public API’s through which objects expose methods to interact with outside code by hiding (complex) internals, which is in fact abstraction.

Since interfaces enforce implementation of methods it is also said to be contract programming. It can be put this way, the class that is implementing the interface is having a contract with interface to implement(define) each and every method that are declared in the interface.

All methods declared in interface are implicitly public

Class can implement any interface by using keyword implements.

In the above example class Task is implementing Runnable interface . Which is very common way to create threads. Where, Thread constructor expects object of type Runnable (or object of class which implements Runnable). Here, accepting Runnable object would enforce and will make sure that passed object will have run method, which will be called by thread when thread is started using Thread.start .

Enumerations are special kind of classes to define a new data type with set of only values that data type can have. In other words, an enumeration(enum) is a set of named constants. An enumeration object holds any value that was declared in definition but not other values.

Each enum constant(member) is implicitly declared as public static final

Semicolon (;) at the end of enumeration constants is not required if defined enum contains only named constants

Enumeration are very powerful where they can have methods and fields like any other class. Following image illustrates an enumeration with fields, constructor and methods

As discussed above enumeration are very powerful than just being named constants. Following code shows defining enumeration type with fields and methods

Annotations are used to provide meta data in source file. Annotations do not effect operation and control flow of code they annotate. The information or meta data the is embedded into source file is formally called as annotation.

Annotations leave semantics intact. Thus, no affect on flow and execution of a program. Annotation are effectively used by external tools like documentation generator, compiler and build automation tools.

Annotation are defined using @interface . Annotations don’t contain any logic but only members.

Annotation are applied to any type by calling Annotation prefixing @ with arguments in the form of key value(member name and value). Default argument can be omitted unless it is required to override.

Annotations are deeper than they look, please check other article specific to annotations for more

Objects are key to understand object-oriented programming. Objects hold state and have functionality. State is represented by variables that are called as fields or member variables and functionality of object is defined by methods.

Objects are effectively used to represent any real work object, entity, concept, event or concept. For example : dog, mobile, car, student, instructor, college, marriage. In java everything that objects know is state/data (fields) and can do/perform functionality/behavior(methods). For example if you take dog , it’s characteristics are name, breed, color and owner and it’s behavior fetching, eating, sleeping and barking. In a program we write these characteristics of real work object(here in this example it’s dog) are translated into data or state formally called as fields (in some other OOP languages, member variables or instance variables or attributes) of object and behavior(fetching, eating, barking etc) is defined by methods.

Blueprint of objects is defined by classes

Each object has it’s own isolated state or data. Objects are created from classes using the process called instantiation using keyword new

Following image illustrates, as if car is a object what are it’s fields(in other languages called attributes or properties) and methods.

This phenomena of representing real word object’s characteristics and behavior in source program as fields(data) and methods is very effective. It enables us create direct analogy of real word tangible and intangible things in a program. 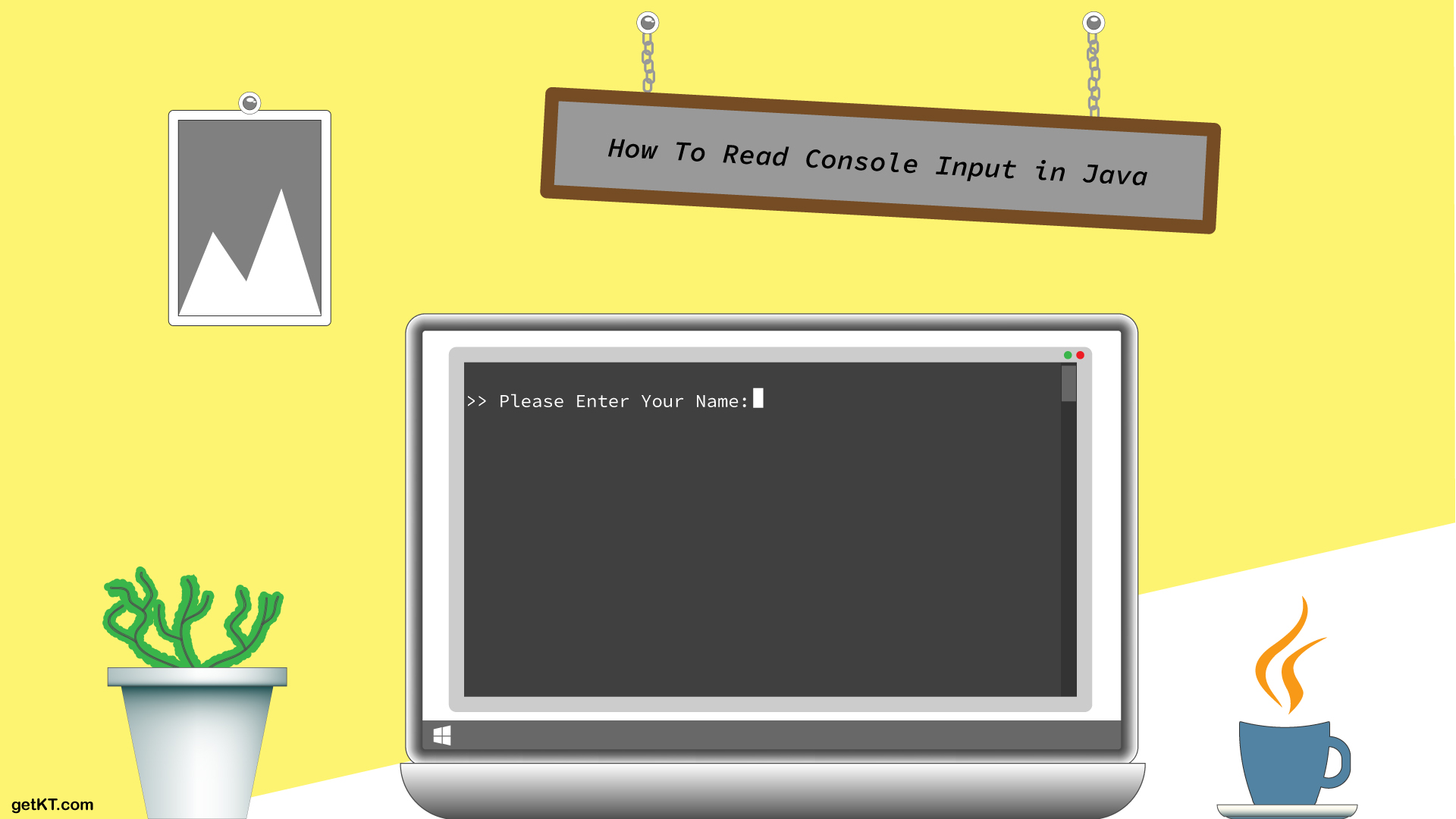 How to read input from console in Java